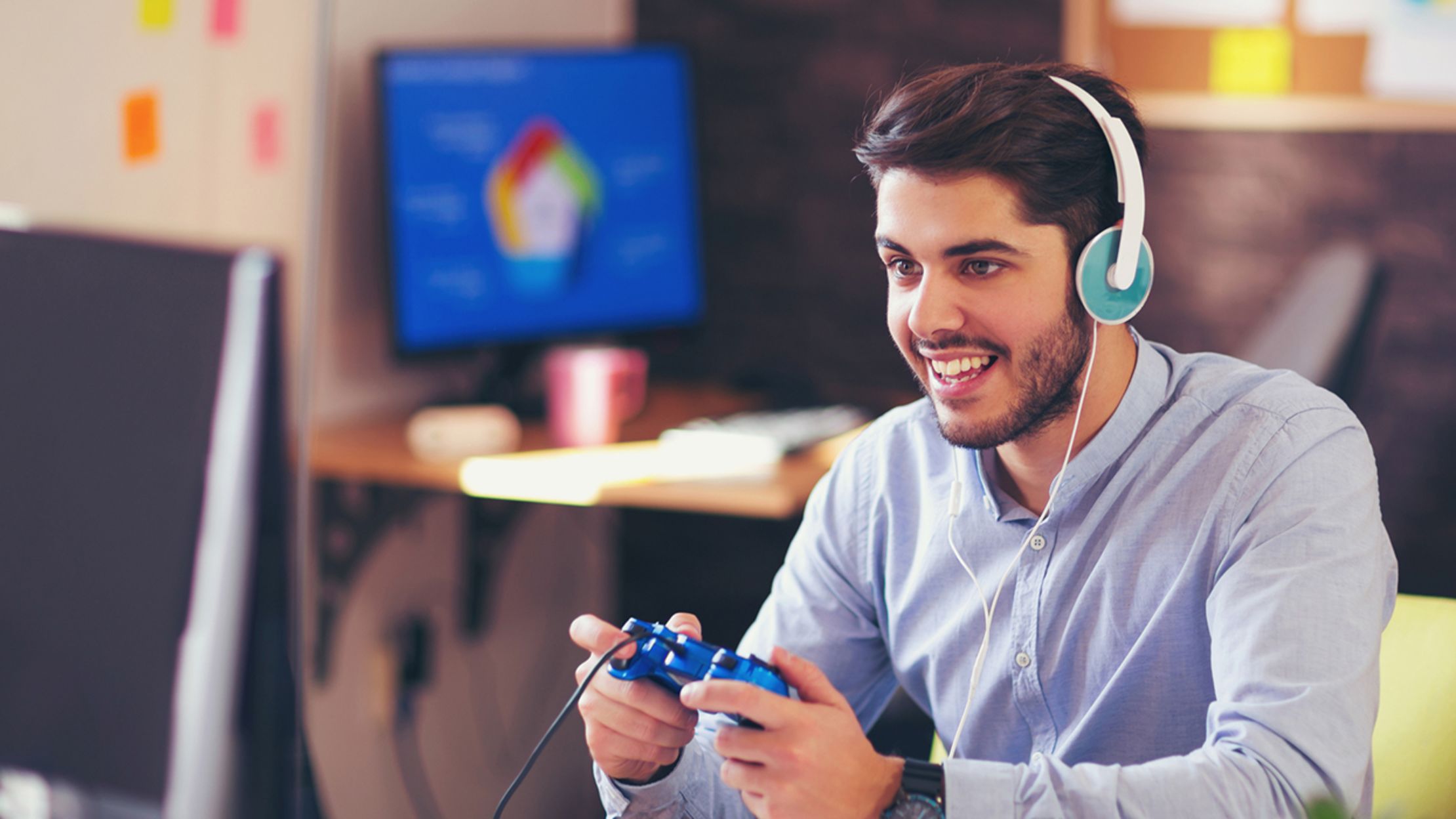 How To Get a Job as a Video Game Tester

Working as a game tester seems like a job where you need to spend all day playing video games. And it sounds perfect, almost idealistic even.

Regrettably, that view is vastly different within the gaming industry, as the role of 'quality assurance technician,’ as often video game testers are known, is viewed as an entry-level-position. However, it is still a fantastic way to kickstart a career in the industry before transferring into other, more high-ranked sectors.

QA can often result in playing lots of games. And there are many examples of gaming professionals who started their careers in video game testing and worked their way up to become game producers, programmers, developers, or creative directors.

But to be fair, QA is a really diverse space, where playing games might be just a small part of the job. And while it may be viewed from the outside as only a stepping stone in the industry, it is actually a technical, challenging, and rewarding career.

In today’s bug-infested games, the role of QA is as crucial as ever before. After all, video companies are infamous for releasing unfinished products, accompanied by poor service and technical issues. And there is only so much a simple gamer can tolerate.

‍For starters, most game testers do not work within studios. Instead, they work for outsourcing QA companies that test different game products; and as such, there is a variety of testing roles. ‍

This job is what most people associated with video game testing. QA teams need to find and eradicate the majority of bugs and glitches in a game and subsequently offer feedback on game builds. These testers, therefore, are required to checking features and how harmonically integrate within the game. And obviously, they get to play games a lot to do that.

‍Localization testers are tasked with checking the game text and audio to ensure that they match and are accurate. And therefore, that the game is going to be well received in all regions. Translation and the implementation of dialogue and voice-overs changes might be required too.

‍This form of QA ensures that a third-party game works great on different platforms and hardware. For instance, a game planned to release on PS5 and Xbox Series X/S should work and play the same, without significant gameplay issues, minor small graphical ones. Furthermore, a game released on the Nintendo Switch and Nintendo Switch Lite should also be tested extensively, as the Switch Lite lacks the control features found in its older brother.

QA teams active in compliance testing will need to check that a Playstation error message or a Nintendo-related button prompt does not appear in an Xbox game. Otherwise, the game will fail the certification, the quality assurance control. That means game testers must follow the rules set by game companies and developers, and provide a smooth gaming experience across all game platforms.

Further, there are some other forms of testing, too, like performance, usability, focus group, and closed beta testing. And even though these usually are part of the above four jobs, what is certain is that the game tester profession is constantly evolving and developing. ‍

So far, I have analyzed the role of QA outside studios. But within game companies, the role video game testers are integrated with the development teams. And here testers are either QA analysts or QA engineers and have an upwards difference in the pay-scale too compared to staff testers.

Black-box testers are QA analysts who are product experts and can detect defects around qualitative aspects in a game, like balance, value, or if it is in accordance with the original vision.

On the opposite side, gray-box testers are QA engineers who are system-focused. They go deep into the architecture level and contribute to technical discussions.

White-box testing is a more particular aspect of the QA profession. People in this role can write game code that tests game code. In other words, they create automation within QA to lower the technical barrier for non-technical testers. ‍

As with most jobs related to programming, formal education is not a requirement for working as a QA tester. And consequently, unless specified in the job description, most studios will not reject applicants for not having graduated from a computer science school. Yet QA has become an increasingly demanding area within the gaming industry, and certainly, some education would eventually help.

The more technical the nature of the role's responsibilities, such as QA engineer, the more beneficial traditional formal education, such as computer science, game development, and mathematics, could be.

But if colleges are out of the reach of aspiring testers, there is also the recent trend of the International Software Testing Qualifications Board (ISTQB) series of certifications. These diplomas demonstrate excellence and that a QA tester is serious about the profession. And obviously, basic programming skills are beneficial for helping testers to understand code too. Learning resources are abundant online and honestly help people get that dream game testing job. ‍

Best Way To Get Into Games QA Industry ‍

The most challenging part of working as a QA is landing the first job. How can employers trust a complete newbie with no previous experience in game testing?‍

We understand that money may be an issue, but internships can go a great way in the long run. And it does not necessarily have to be in the gaming industry. Experience in any kind of tech company, or simpler summer jobs at Silicon Valley, offers good experiences. Ultimately, the point is to build a solid portfolio that demonstrates knowledge in game design and programming. ‍

Aspiring game testers should build a powerful portfolio as soon as possible. They have to demonstrate their knowledge in programming and code and even insist on their understanding of different game engines, such as Unity, Unreal, and GameMaker. And as these engines have free versions to try and familiarize with their mechanics, it would be wise to create a blog and write up this newly acquired knowledge, and processes of bug fixing efforts. Besides, spending time in QA testing game builds, means spending time testing the game engine, and therefore, it would super helpful to know how engines work beforehand. ‍

Game testers need to scrutinize available testing tools like Test Rail, Charles, proxy, Jira, Visual Studio, Git, Ink, Twine, Blender, 3DS Max, and more. However, they will not have to pay a dime to try them out as most have a completely free or educational version.

Another important field of study is bug abuse. By exploring previous bug abusing examples before they were fixed, QA testers will learn about destructive thinking and how to spot patterns of glitches. MMOs seem the best study material too. ‍

By joining online testing communities, QA people meet other testers who offer guidance and advice. Furthermore, there are even opportunities to test software or indie games. ‍

See all of our Game Tester jobs that are hiring here!

Even though it may sound crazy, being good at games is not the most crucial skill required to become a game tester. ‍

A successful QA tester needs to express in a clear and concise manner and point briefly and accurately, in written form, where the issues are, what they are, and how they occurred, so other testers and developers can understand and fix the problem. ‍

As in every job, patience is required in QA testing as well. Game testers have to reproduce issues and pretty much do the same thing over and over to ensure that the bug they discovered a while ago exists and that it really happens every single time. Therefore, patience is the key, and if unlucky, the glitch may not occur every time, leading to even more 'restart the level' situations. ‍

Game testers must think independently and in a creative way, like different gamers think when approaching games. Some users explore everything in a game environment, while others go out of their way to look out for bugs and exploits. Exposure to as many platforms as possible, furthermore, is an advantage in QA, as well as soft skills like adaptability, flexibility, the ability to work in a team, and problem-solving. ‍

One of the most crucial abilities building testers ought to learn the soonest, especially when working closely with developers, is diplomacy. That strong need for diplomacy is that testers working mostly within game studios work side-by-side with programmers, artists, and designers and need to communicate and negotiate their views across, even if these important people do not want to hear it. They need to develop a hard stomach and learn to leave their ego at the door. And they also need to be open to criticism. ‍

And if testers manage to move up within QA, the ability to stay organized as they manage teams of other testers or liaise with clients is paramount. For example, a QA project leader will assign tasks to each member of the team on a daily basis. Then he will contact the clients throughout the day before sending them the reports and updates on the projects the testers are working on. Furthermore, creating checklists based on design documents and reviewing reported bugs by techniques are also parts of a project leader's daily agenda. ‍

Maybe that dream game studio does not need game testers right now, but surely they need user feedback. When studios host open houses or local play sessions, aspiring QA employees need to get involved. Developers are on the lookout for passionate gamers who can communicate their opinions clearly and provide accurate feedback on gameplay. Furthermore, work opportunities for remote beta testers are always available and offer insight into how to provide actionable feedback. By participating therefore in beta testing you can report bugs and glitches back to game creators, with this experience to be what is really required for QA entry-level interviews.

Successful game testers are always informed on the latest developments within the industry, such as new technology, games, or services. Even though it may seem obvious, people applying to some specific game company should have a solid working knowledge of the games made by the studio. And apart from approaching games from a player-focused perspective, testers should able to approach their work with a business-focused mindset, as at the end of the day, video games are business. ‍

‍Game testers need to have a large appetite when it comes to games and genres. They need to be able to embrace every kind of game, from the World of Warcraft to Mario Party. Everyone would love to work on their favorite multimillion studio from the get-go, but the safest way to get a job in QA is to approach the mobile gaming market, as it is huge and lots of tests available. By trying mobile games, game testers can consequently broaden their gaming horizons and get ready to make the jump into the favorite AAA studios.